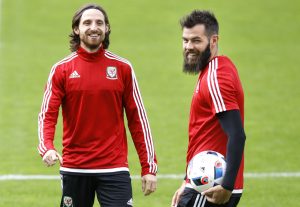 Manchester United have reportedly entered the race as shock candidates to sign Joe Allen this summer as Jose Mourinho joins the race to recruit the Liverpool anchor.

Allen has only a year remaining on his Reds contract, and former club Swansea City have been favourites to land his services up until now, but the South Wales Evening Post reported United are now in the mix.

It’s said Liverpool manager Jurgen Klopp would be willing to sell Allen if the right offer comes in, but just how open he’d be to handing his player to the Merseysiders’ biggest rivals is up for debate.